“My shoulder doesn’t hurt, unless I try to use my arm” How to Solve Nagging Shoulder Pain
Jan. 6, 2017
I’m working with a patient right now who had shoulder pain a couple months back (let’s call him “Norm”).

So far, Norm’s rehab is going pretty smoothly. He has good flexibility, has stopped taking his pain medications and is back to working light duty at his truck driving job.

But he has a problem…here’s what he just told me:

“My shoulder feels fine, as long as I don’t use my arm. But as soon as I try to reach or lift something, I get pain down the outside of my arm.”

At this point, Norm sounds like a lot of patients we initially start treating who have shoulder pain. He’s recovered well from his surgery, but now he’s experiencing a very common presentation of shoulder pain. 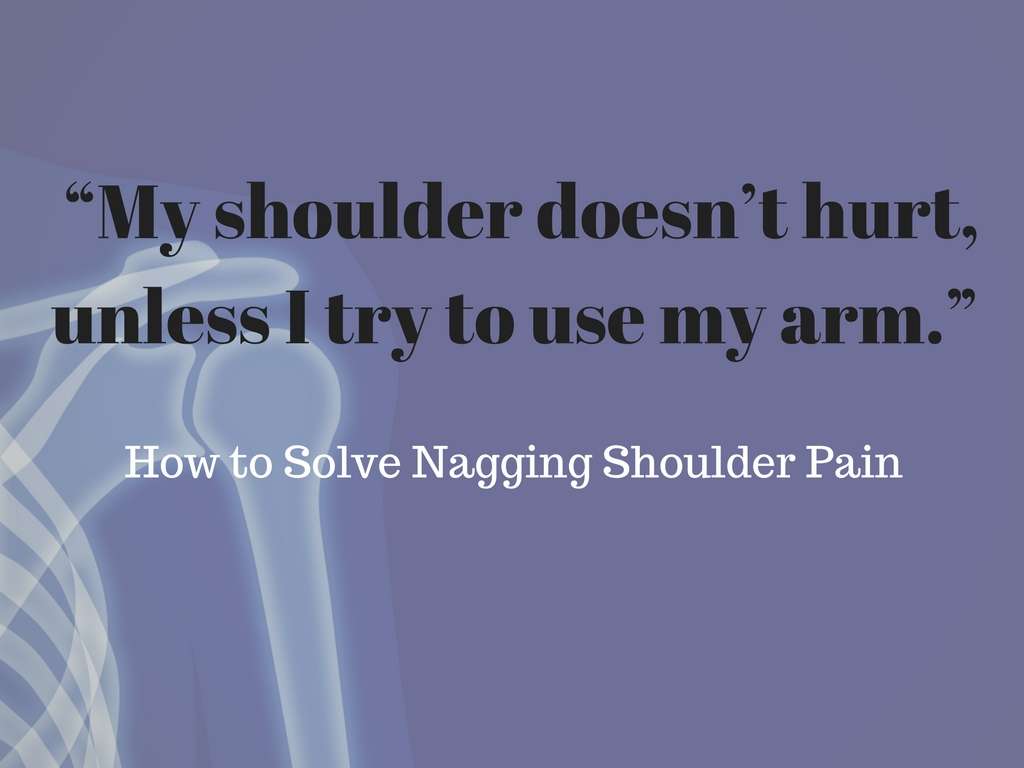 When he reaches out, particularly to the side or across his body, he gets a jolt of pain in his shoulder that extends down the side of his upper arm.

Does this symptom pattern sound familiar?

With a couple quick tests, I confirmed that Norm has irritation of his rotator cuff muscles, as well as something we call “impingement”, which basically means when he puts his arm in certain positions, his top rotator cuff muscle gets pinched, causing pain.

So now that we know what’s causing Norm’s shoulder pain, what can we do about it?

To answer that question, let’s take a look at some common mistakes people make when treating shoulder pain.

As you can probably tell, overcoming nagging shoulder pain can actually be quite tricky.

If you’ve been struggling with any type of shoulder pain for more than about a month, it’s very likely you’ll run into the same problems Norm encountered.

Lucky for you, we’re here to help!

So if you’d like to determine what’s really causing your shoulder pain (the root cause) and if we can help you eliminate it once and for all, please give us a call so we can set you up with a FREE 30-minute session with one of our PTs.

During your free 30-minute “discovery visit”, we’ll help you understand exactly what’s going wrong with your shoulder, so you can make the best decision about what to do about it.

Sign up to receive weekly health tips in your inbox!

And we'll send you our best advice and top tips in one special report...

It's FREE! Just look below and find the one that works best for you... 14 Ways to Quickly Ease Back Pain without Relying on Pain Killers or Having to Call Your Doctor! Discover the 7 simple tactics that will help you put an end to daily, annoying Neck Pain and Headaches The special report that tells anyone in their 40’s, 50’s, 60’s and above how to put an end to chronic, daily, annoying KNEE PAIN Learn the 8 best kept secrets that you can implement in the months before having total knee replacement surgery to ensure a speedy recovery! Want to Get Relief Faster?

Choose Which One Works Best For You...

Choose Which One Works Best For You...